Thank you to Damaris at Good Choice Reading and Mary Ting for letting us be on this awesome book tour! 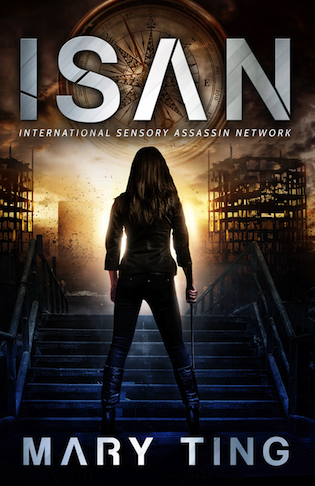 The world has changed.
Scientists warned it would happen.

Struggling to survive, seventeen-year- old Ava ends up in juvenile detention, until she is selected for a new life—with a catch. She must be injected with an experimental serum. The results will be life changing. The serum will make her better. To receive the serum Ava agrees to join a program controlled by ISAN, the International Sensory Assassin Network.

While on a mission, she is abducted by a rebel group led by Rhett and told that not only does she have a history with him, but her entire past is a lie perpetuated by ISAN to ensure her compliance. Unsure of who to trust, Ava must decide if her strangely familiar and handsome captor is her enemy or her
savior—and time is running out.

Mary Ting resides in Southern California with her husband and two children. She enjoys oil painting and making jewelry. Writing her first novel, Crossroads Saga, happened by chance. It was a way to grieve the death of her beloved grandmother, and inspired by a dream she once had as a young girl. When she started reading new adult novels, she fell in love with the genre. It was the reason she had to write one- Something Great. Why the pen name, M Clarke? She tours with Magic Johnson Foundation to promote literacy and her children’s chapter book- No Bullies Allowed.

“Would you like my assistance? Or you can just stand there so I can stare at you a bit longer.”

Startled, I whirled toward the sound of a familiar, seductive voice. Sniper stood by the walk-in closet in a cool, relaxed manner with his hand braced on the door. His hair was slicked back, looking polished and debonair. My heart pummeled, but not in fear.

Was I crazy to be attracted to him? Mesmerized by the black tuxedo forming to his perfect body, I stared at him and wondered if I’d dreamed him up. His presence confirmed I hadn’t imagined him above the stairs earlier. Then I wondered if he’d come alone.

Unnerved, I gritted my teeth. He hadn’t heeded my warning to stay away. I should scream or plan an escape out of the bathroom, but I couldn’t move or think. His presence stirred my curiosity and I wanted answers, especially when the lunatic thought he knew me.

“It doesn’t concern you,” he said.

His nonchalant tone caused me to raise my voice. “The hell it doesn’t.”

I scoffed. “Are you here to try to kidnap me again?”

I might not have Helix, but I had my heels and months of training backing me up. If there was one thing I was good at, it was bringing a person to their knees. Courage grew inside me and I dropped my dress.

Sniper snapped out of his stupor and his amber eyes grew darker. “Where are my manners? I admire the dress, but I like what you’re wearing now so much more.” He waggled his eyebrows. “You look absolutely beautiful tonight.”

I became breathless when he closed the gap between us. Why was I letting him? When Sniper raised his hand, I flinched. My heart galloped faster when he cupped my face and ran his thumb ever so tenderly along my cheek.

“I wish I could’ve been your date tonight. We could’ve danced together. Dancing with me always made you happy.”

I closed my eyes for several seconds, hypnotized by his voice, by his touch. I pictured us slow dancing, not because it had happened, but because I desperately wanted the happiness he described.