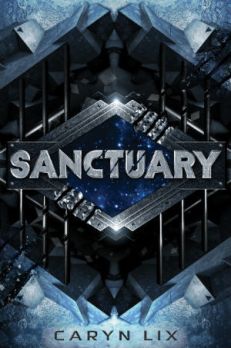 Kenzie holds one truth above all: the company is everything.

As a citizen of Omnistellar Concepts, the most powerful corporation in the solar system, Kenzie has trained her entire life for one goal: to become an elite guard on Sanctuary, Omnistellar’s space prison for superpowered teens too dangerous for Earth. As a junior guard, she’s excited to prove herself to her company—and that means sacrificing anything that won’t propel her forward.

But then a routine drill goes sideways and Kenzie is taken hostage by rioting prisoners.

At first, she’s confident her commanding officer—who also happens to be her mother—will stop at nothing to secure her freedom. Yet it soon becomes clear that her mother is more concerned with sticking to Omnistellar protocol than she is with getting Kenzie out safely.

As Kenzie forms her own plan to escape, she doesn’t realize there’s a more sinister threat looming, something ancient and evil that has clawed its way into Sanctuary from the vacuum of space. And Kenzie might have to team up with her captors to survive—all while beginning to suspect there’s a darker side to the Omnistellar she knows.

One word to describe this book: WOW.

Sanctuary is a thrilling adventure filled with edge-of-your-seat moments and intense battle scenes that grab you and never let go. Kenzie and the prisoners come face-to-face with a horror they never imagined and to stay alive, they must work together. And if the don’t, the prison, and the surrounding planets and people, will be in mortal danger.

The idea behind this book is exceptional and well-written. Having a space prison with teenage prisoners who exhibit powers, while also adding in killer aliens and a little bit of romance, makes for one heck of a book. Sanctuary was action-packed; I had such a difficult time putting this book down when I had to sleep or go to work or clean. It’s just THAT GOOD.

Kenzie is an enjoyable and intricate character. She’s smart and a hard worker; she’s a character many people can relate to. And I loved how throughout the whole book, Kenzie kept relating to her favorite manga character. Kenzie thought her only problem would be finding a way to escape from the prisoners. She never expected her life, and everyone else’s, to be in danger. She never expected to see frightening creatures from a horror movie board Sanctuary and hunt them all down. Kenzie, and the other teenagers, are in for a rude awakening about those creatures and the corporation Kenzie’s parents have devoted their every waking moment to.

The characters are engrossing and complex. More than once the reader is reminded that the people fighting these creatures are teenagers, not adults. Well, they may have some butt-kicking awesome powers, but in the end, they are still teenagers. There are times where emotions cloud their judgments, where the decision between life and death is tested. Through all the battle scenes, all the discoveries about Omnistellar Concepts and themselves, at the end of the day, they are all still teenagers. And I love that. They are thrown into this brutal world as teenagers and have to act as adults and work as a team to survive. The character development of each of the characters is exquisite and surprising; the cast of characters work so well together. Sanctuary was, overall, a fantastic science fiction book. There was never a dull moment.

I was super excited to find out that there will be a sequel to Sanctuary and I cannot wait to read it. Sanctuary left me with more questions than answers; plus, I would love to have some more of Cage in my life. 😉

Sanctuary by Caryn Lix comes out July 24, 2018, so make sure to pre order or grab your copy on release day! Trust me, this is not a YA Sci-fi you are going to want to miss!

One thought on “*ARC Review* Sanctuary by Caryn Lix”