About Love, Across the Divide:

Title: Love, Across the Divide

On the eve of the 2016 elections, young Republican Megan Thompson faces a once-in-a-lifetime opportunity when her boss decides to groom her to run for his congressional seat in 2018. Ambitious and pragmatic, Megan is missing just one thing: a wealthy, well-connected trophy husband.

So, when Megan moves from Florida to DC and lets the congressman broker a power match, she’s looking to get down to work, not fall in love. And she’s definitely not looking to make nice with her new roommate, Andrew Croswell, a liberal environmentalist determined to make her life hell.

After a series of unpleasant blind dates, Megan begins to lose hope of finding her shiny white Republican knight in time to boost her appeal to donors and voters. At last, she hits it off with Brock, a dashing, Don Draperesque spokesman for the NRA and even love-shy Megan thinks he could be “the one.” But as the year progresses, she and Andrew start getting along a little too well, and Megan finds herself second-guessing all her well-laid plans.

Things start spinning out of control when a special election pushes everything up by a year. As Megan races against the clock, she’ll do anything to win—almost. Now she must choose: career over love, or love over politics?

Love, Across the Divide, follows genuine, familiar characters from both sides of the aisle, smashing stereotypes and striving to make sense of our not-so-brave new world. Most of all, it asks a crucial question: Can love bridge the great American divide?

“Like driftwood at sea, they had traveled alone for a long time, and now they were inching closer, wave by wave, until at last they crashed into each other. The world as they knew it ceased to exist.”

The hate to love trope has been done so many times before and its eye-rollingly nauseating but this was a breath of fresh air. Instead of waiting for the inevitable to happen, I wanted to savor every moment.

This was a really interesting read. Bringing a really difficult subject into a book and making it light, funny and occasionally insane was just what we all needed. There was never a side chosen in this book but it did make for some comical moments. Even though we all knew where this was headed, it still kept my interest peaked. There was never a dull moment between the two main characters and I was hooked.

I thought that I would be bored with a lot of Government lingo and the daily situations that they face but I found myself really intrigued by what was going on and how they deal with things. I can’t get over how more empowered I feel after reading this one.

I would recommend this to anyone that is looking for something different than just your typical love story. The backstory alone could have held its own but the love story thrown in was such an added bonus. Krystal writes the perfect mash-up in these unstable times and brings more to the picture with this book.

I’m just sad that tall, dark, and handsome was not who we wanted him to be. *pout*

Rafflecopter for Love, Across the Divide Blog Tour Giveaway: 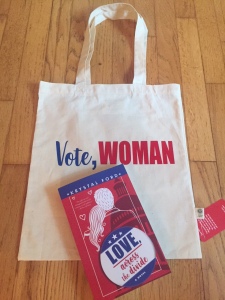 Originally from Montreal, Krystal Ford has fallen in love with the Hudson Valley, New York, where she calls home with her husband and two children. She has a Master of Arts from New York University and, when she’s not writing, works as a community organizer around environmental issues. Her favorite pastimes are reading books and gardening.