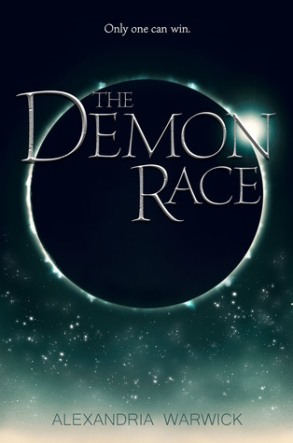 Hidalgo meets An Ember in the Ashes in this Middle Eastern-inspired YA fantasy debut.

A race across the desert.

It occurs once every thousand years: the Demon Race. A test of will and strength, it is a race across the Saraj, a fight for the prize of a lifetime. And it is the key to Namali Hafshar’s freedom.

When shy, seventeen-year-old Namali learns of her arranged marriage, she flees home and enters the Demon Race for the chance to change her fate. But to compete, she must cross the Saraj on a daeva, a shadow demon that desires its own reward: to infect her soul with darkness.

Namali soon learns the desert holds more dangers than meets the eye. The only person she can trust is Sameen, a kind competitor seeking his own destiny. As her affection for him grows, however, so too does the darkness in her heart.

In this race of men and demons, only one can win. But the price of winning might be more than Namali is willing to pay.

“Light, darkness…one cannot exist without the other, for the very definition of light is the absence of dark. They are both necessary for the balance of the world.”

Have you ever read a book that pleasantly surprised you? That was different from your initial reaction? For me, The Demon Race is one of those books. I’ve actually had The Demon Race on my radar for quite some time, so I was ecstatic when I received an email from the author to review her book. Hidalgo is one of my favorite movies; plus, a race across the desert on the back of a daeva all the while trying to prevent the demon from crawling into your mind? Count me in! The Demon Race will bring you up close to Namali’s adventure of self-discovery and worth. She will determine what it really means to be her true self in a world that has been set against her since birth. But the question arises: will Namali like the person she becomes during and after the race?

“It was true what people said: the world appeared most beautiful on the eve of death.”

Many believed the Demon Race to be a myth. A race that takes place once every one thousand years, granting the winner one wish, a wish their heart most desires. Namali knows the stories are true when she gets word of the legendary and very real race taking place in mere days. And she knows, that if she stays in her small town and marries a man she does not love, she will never become the person she wants the be. Nor will she get what she most desires: freedom. So, Namali does what hopefully any woman in her situation would do: she leaves home and enters the race.

The race is unlike anything I’ve ever read. To partake in the race, each contender must ride a daeva (a demon), all the while steering clear of the daeva’s luring capabilities. Afterall, each daeva wants a reward from each rider: to fill their souls with darkness. Namali has to constantly fight to escape the lure of the darkness. And the times she can’t help but be overtaken by the deceiving demon, she loses a piece of herself. The race not only sets her on an adventure toward a desirable prize, but also on an adventure of self-discovery.

“In order to escape alive, she must push forward with ferocity and unwavering belief. She had done it before. She could do it again.”

Namali is a girl who is strong in her religious beliefs. And that was something I really enjoyed. There’s times where she questions her faith, but she always sticks to her beliefs and I really liked that. There are times she loses her faith, loses the telltale signs of who she really is, but she never once lost sight of her religion. The Demon Race adequately describes the different religions in a way that connects wonderfully with the story. What I also liked about Namali is how strong of a character she becomes. She has a mind of her own and she knows what she wants entering the race. Namali struggles with the concept of strength, thinking it’s not something she deserves. But it’s been with her all along, and her journey is quite something to read.

“She was sinking. Sinking into warm, deep waters. They tugged her down to a murky, gray existence, where shadows twined around her leaden limbs, absorbing into her skin until they disappeared below the surface.”

The Demon Race is a book with such gorgeous prose. There were scenes where the writing was so well described and beautifully illustrated that brought the story to life. The author embellishes her stunning writing with scenes that jump off the page and words that will utterly captivate you. Alexandria Warwick has a way with words; I had pages upon pages bookmarked for quotes and it became difficult only selecting a few. Her writing is something I absolutely loved and I can’t wait to see what she writes next.

“It was true what people said: the world appeared most beautiful on the eve of death.”

Thank you to the author for sending an advanced e-copy for me to read and write an honest review! All quotes are from the advanced e-copy and may not appear in the final novel.