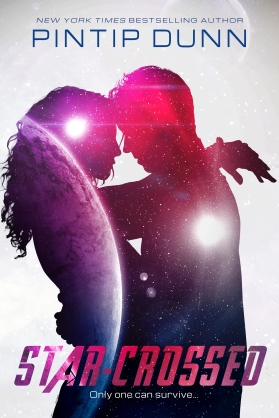 In a world where nutrition can be transferred via a pill, and society is split into Eaters and Non-Eaters, seventeen-year-old Princess Vela has a grave dilemma. Her father, the king, is dying, and only a transplant of organs from a healthy Non-Eater boy will save him.

Vela is tasked with choosing a boy fit to die for the king, which is impossible enough. But then Carr, the boy she’s loved all her life, emerges as the best candidate in the Bittersweet Trials. And he’s determined to win, because by doing so, he can save the life of his Non-Eater sister.

Refusing to accept losing the boy she loves, Vela bends the rules and cheats. But when someone begins to sabotage the Trials, Vela must reevaluate her own integrity—and learn the true sacrifice of becoming a ruler.

Pintip’s novel FORGET TOMORROW won the 2016 RWA RITA® for Best First Book, and SEIZE TODAY won the 2018 RITA for Best Young Adult Romance. Her books have been translated into four languages, and they have been nominated for the following awards: the Grand Prix de l’Imaginaire; the Japanese Sakura Medal; the MASL Truman Award; the Tome Society It list; and the Romantic Times Reviewers’ Choice Award. Her other titles include REMEMBER YESTERDAY, THE DARKEST LIE, GIRL ON THE VERGE, and the upcoming STAR-CROSSED and MALICE.

Star-Crossed takes readers to a new and unique world, where there are two different kinds of people: the Aegis and the colonists. Aegis have the ability to ingest more food than the colonists due to genetic modifications that take sixty years of their life. With that genetic modification, Aegis are able to feed everyone with nutrition pills. This itself is a unique concept. I’ve read a decent amount of YA Sci-Fi, but none had this concept where people give up sixty years of their life to feed their nation with pills. Not to mention the colonists have never tried real food. Imagine having a life where you take a nutrition pill and never know the taste of real food. It sounds quite horrible, in my opinion (both options do).

The author knows how to weave a fantastical world together. There’s enough detail to bring the story to life and make the readers feel like they are part of that world. What I found nice was that the story did not focus on heaving world building, but rather what happened to the characters. Princess Vela is the heart of the story, and the plot brings her story together wonderfully. As the reader, expect plot twists and a killer on the loose. I was able to figure out some of the plot twists, but I was still pleasantly surprised by the ones I did not figure out. In no way does this story feel like it just ends or it cuts to the chase too fast; it’s perfectly paced.

Pintip Dunn does a wonderful job with character building and differentiation. Each character has their own personality and a strong relationship with Princess Vela. Princess Vela and her sister, Princess Blanca, are so exceptionally different, and it’s fascinating to see how each tackles their assignment for who will be the next successor. Vela handles her assignment with heart and demonstrates a type of leadership she never knew she had; whereas Blanca is more headstrong and listens to the facts instead of her heart. Vela’s relationship with Astana is heartwarming and like any friendship; their friendship reminded me of the one I have with my best friend, and how I would do anything for her, just like Vela. And then there is Carr, the boy Vela has always loved. I saw the love they both had for each other, and that love only increased as the Trials continued.

Overall, I really enjoyed Star-Crossed. I liked how it was realistic enough in the sense that Princess Vela knew there were things she could not change, and things she could. Pintip blends Sci-Fi, mystery, and romance well to weave together a beautiful story. This was the first book I’ve read by Pintip Dunn, and I plan on definitely reading more by her. Star-Crossed is out now!

Recommended for readers who love sc-fi, unique plots, a little mystery, and a budding romance.