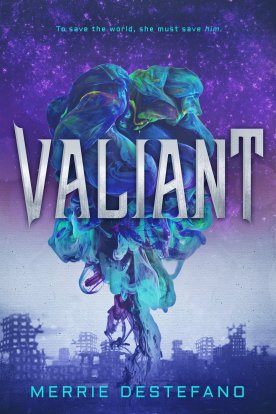 The Valiant was supposed to save us. Instead, it triggered the end of the world.

Earth is in shambles. Everyone, even the poorest among us, invested in the Valiant’s space mining mission in the hopes we’d be saved from ourselves. But the second the ship leaves Earth’s atmosphere, our fate is sealed. The alien invasion begins. They pour into cities around the world through time portals, possessing humans, forcing us to kill one another.

And for whatever reason, my brother is their number one target.

Now the fate of the world lies in the hands of me, a seventeen-year-old girl, but with the help of my best friend, Justin―who’s suddenly starting to feel like more―maybe if we save my brother, we can save us all…

“The earth, the moon, the stars, they all stay the same. But we don’t. We change.”

Valiant is a fast-paced novel with non-stop action scenes and horrifying creatures. The readers follow Sara and her friends on their death-defying journey to keep Sara’s younger brother, Gabe, safe from the Xua. The Xua want him for an unknown reason, so Sara and her friends kick some alien butt to keep him safe. The bond between Sara and Gabe was one of my favorite things about this book. I have an older brother and, though Sara’s brother is younger, I would do the same thing if something like this were to happen. I’d protect him and my family at all costs, and I know he would do the same. So, I really liked their relationship and, of course, the exhilarating action scenes.

“And then, I hear the call of death as this planet pulls me onward, toward ashes and fire and a roaring wind that will never stop blowing. I part my lips, and centuries of death pour out. An entire civilization is dying in this moment.”

Anyone that knows me knows that I love a good action scene. Valiant had a ton of phenomenal action scenes; it was action scene after action scene. The action scenes are what really kept my interest. They are so well described and intricate, that I was looking forward to all the chaos the friend group would get into. I especially enjoyed the scenes with the Xua, the alien species. The Xua are interesting and utterly creepy, considering they have the ability to possess human bodies through the mouth. Once a human is taken over by a Xua, that’s it. You’re done for, and there’s no coming back. That, in itself, is scary, so it definitely makes for some good action scenes, as people try to prevent the Xua from possessing them.

“At this moment, I am anything but valiant. I am weak and pitiful and ashamed and broken and defeated.”

Thought I did like the aspect of this book and the action-packed scenes, I had a hard time connecting with the characters, more so Sara and her friends and not Sara’s relationship with her brother. By the end of the book, I had no care for the characters. The story, yes. But the characters did not leave a lasting effect on me. By the middle of the story, I couldn’t care less if a character died or if something bad happened. And that’s not what I wanted to feel. I wanted to connect with these characters; I wanted to feel their pain and their sorrows. But I couldn’t, and I hate saying that. This may not be the case for everyone that reads Valiant, but it was for me. And even though there were some amazing descriptions, I still could not connect. I would love to see more character development in the second book, which I do plan on reading.

But overall, this was not a bad book. I did enjoy the unique storyline, some of the witty banter, and the fascinating history surrounding the Xua. Even though the characters were not really for me, I do want to continue the story, especially with THAT ending.

Do I recommend? Yes, especially for those readers that love plot-driven and action-packed stories.

Thank you to the publishing company for sending an advanced e-copy for me to read and write an honest review! All quotes are from the advanced e-copy and may not appear in the final novel.