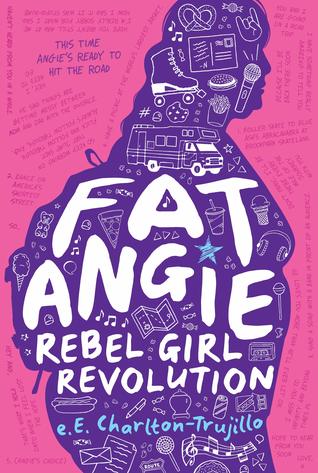 In this companion to the Stonewall Award–winning Fat Angie, Angie’s girlfriend has moved away, Angie is constantly bullied as she starts as a sophomore after repeating her freshman year, her mother still can’t stand her, and her former best friend, Jamboree, is back in town…it’s still good to see Angie, a very human combination of neuroses, fears, truths, and desires, break through some of her defenses and take risks, from singing to loving. ―Publishers Weekly

“Life is heart and ache. You can’t have one without the other.”

I’ve been waiting for this second book for six years and it’s finally here. Fat Angie was one of those books that opened my eyes to the world of bullying and it made so many emotions come pouring out of my soul all at once. I was happy, sad, and sometimes angry at the people and scenarios of the book. I’m glad Angie is back with a more hopeful story.

Angie is in her sophomore year of high school and she’s hoping that this year is different. But she soon learns that things haven’t changed and people are making it their top priority to make her life a living hell. Making her relive her breakdown at a pep-rally and the death of her sister. And it’s not like she is getting any help from her Mother at home.

Things are not going her way this year and she is ready to throw in the towel. Her best friend, Jake is dating someone who used to bully her, Gary Klein is at his worst and tormenting Angie until she almost gives up, and her ex-friend Jamboree is back and thinner than ever. She feels as if there is no one else to go to, now that her sister and her best friend are gone. Angie’s mother is making her go see a therapist about her behavior lately but she has to prove to her new therapist that she is getting better and learning how to stand up for herself.

Angie is trying to stay strong as they dedicate a memorial statue to her deceased sister. At the memorial service, someone that knew her sister leaves a letter her sister wrote to her before she passed away. Reading the note floods Angie with emotions and now she’s on a mission to live out the dreams of her sister.

Angie and Jamboree put the past behind them as they go on a journey of a lifetime and live out Angie’s sister last wishes. They are traveling through Ohio and seeing the sights her sister wanted them to go visit and to get Angie out of her comfort zone. In a packed RV, will Angie learn to love herself without her sister? Or will she let her past ruin her life?

Fat Angie: Rebel Girl Revolution was a really good book. It was emotional to get through because of what Angie was dealing with. It really hurt when her own Mother wouldn’t stand up for her and chose to believe someone else. That really got to me. But the end was something of a fairy tale and it filled me with joy. The deeper meaning is what holds this all together.

Click on the image below to be entered to win. Good Luck!

As an author, she is the recipient of the Delacorte Dell Yearling Award for her first novel, Prizefighter En Mi Casa. What followed was: the Parents’ Choice Silver Honor, a Flamingnet Top Choice Award,a National Council for the Social Studies Notable Book and made the NYC PublicLibrary Teenage List. Check out the Reviews on Amazon.com

Her second novel Feels Like Home released to critical praise and award nominations.

It was her third novel, Fat Angie that garnered the American Library Association’s Stonewall Award, was a Lambda Literary Finalist and a Choose to Read Ohio book. Fat Angie was also the foundation for a unique book tour to empower at-risk youth via writing and discussion and the catalyst for the feature documentary At-Risk Summer. From that experience, she co-founded a non-profit to bridge the gap between at-risk youth and artists called Never Counted Out.

Currently, she is completing the feature documentary, A Cultural of Silence for GLSEN Cincinnati, writing two novels and Fat Angie: Rebel Girl Revolution in early 2019.

Click the highlighted links for Meet At Human or The Pirate Tree’s interview about e.

TWITTER: @pinatadirector
GOODREADS: https://www.goodreads.com/author/show/354572.E_E_Charlton_Trujillo
FACEBOOK: https://www.facebook.com/indiereel
INSTAGRAM: https://www.instagram.com/pinatadirector/
A court of Coffee and Books would like to thank Jean Book Nerd for allowing us to be a part of this book tour. For more information about this blog tour and upcoming events, please click on the image below.