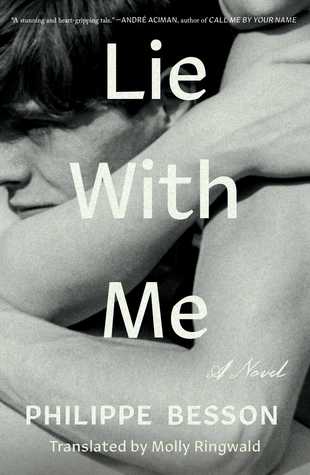 The award-winning, bestselling French novel by Philippe Besson about an affair between two teenage boys in 1984 France, translated with subtle beauty and haunting lyricism by the iconic and internationally acclaimed actress/writer Molly Ringwald.

Just outside a hotel in Bordeaux, Philippe chances upon a young man who bears a striking resemblance to his first love. What follows is a look back at the relationship he’s never forgotten, a hidden affair with a gorgeous boy named Thomas during their last year of high school. Without ever acknowledging they know each other in the halls, they steal time to meet in secret, carrying on a passionate, world-altering affair.

Dazzlingly rendered in English by Ringwald in her first-ever translation, Besson’s powerfully moving coming-of-age story captures the eroticism and tenderness of first love—and the heartbreaking passage of time.

“This feeling of love, it transports me, it makes me happy. But it also consumes me and makes me miserable, the way all impossible loves are miserable.”

Lie With Me was that gut-wrenching read that makes you have trouble catching your breath. This was such a beautiful and harrowing story of young desire in the 1980s. You’ll have trouble keeping the tears from falling.

Even days after I finished this, my mind kept going back to this and it broke my heart all over again. I had to up my rating because of that. I can’t get this beautiful story out of there.

Philippe is talking to an interviewer at a hotel when he spots someone. A someone that resembles someone from his past. As he calls out his name and goes after him, he wishes with all his heart that this someone is Thomas. As fate would have it, it’s not but it’s someone else that will help him fill in the blanks of the past.

As the past comes spilling out of Philippe, what transpires is something so deep and wonderful that we don’t want it to end. In his younger years, he strikes up a secret romance with Thomas as love blooms between these two boys. After all this time, Philippe remembers everything and hopes that Thomas does as well. Things start to come together and what was once young love turns into fond memories that no one will ever forget or want to.

Lie With Me was one of the most gorgeous reads that I have ever read. There was something about this that touched my soul and I’ll never forget it. Besson paints a tender and beautiful tale of first loves and desire. It’s a really quick read that you will devour in one sitting because of its pure perfection.

If you get a chance to read this, do it. I dare you to tell me that this didn’t make you weep!!