Title: In the Hall with the Knife

A murderer could be around every corner in this thrilling YA trilogy based on the board game CLUE!

When a storm strikes at Blackbrook Academy, an elite prep school nestled in the woods of Maine, a motley crew of students—including Beth “Peacock” Picach, Orchid McKee, Vaughn Green, Sam “Mustard” Maestor, Finn Plum, and Scarlet Mistry—are left stranded on campus with their headmaster. Hours later, his body is found in the conservatory and it’s very clear his death was no accident. With this group of students who are all hiding something, nothing is as it seems, and everyone has a motive for murder. Fans of the CLUE board game and cult classic film will delight in Diana Peterfreund’s modern reimagining of the brand, its characters, and the dark, magnificent old mansion with secrets hidden within its walls.

Please note: A Court of Coffee and Books receives a small commission for any purchases made through the links above. All commission earned goes toward supporting and maintaining this blog.

In the Hall with the Knife is a Clue mystery fans will love filled with thrilling dialogue and intrigue. This first book is loaded with Easter eggs from the original movie and game and multiple mysteries outside of a murder. This book is not just about solving a murder: it’s also about determining who everyone can trust when everyone has something to hide.

I thought Peterfreund did a great job staying true to the movie and boardgame while also adding her own personal twists to the story. You get the original characters but here’s a twist: they’re teenagers at an elite boarding school who have to solve a murder with no real murder solving skills. But that easily proves difficult when all of them start to suspect one another. Orchid has a potentially deadly past she’s trying to keep buried. Peacock has a secret that could ruin her life and career. Vaughn is living a double life – and no one suspects that he is. Mustard just transferred to this boarding school with a reason he’s not quite ready to reveal. Plum is the golden boy, but being the golden boy comes at a cost. And Scarlet will do anything to succeed at this school – even go to drastic means to come out on top. And then someone turns up dead – someone that each of them has a motive for murdering. But the question is – who really murdered someone? 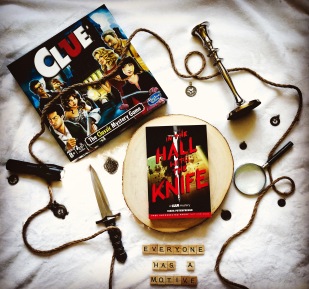 One of my favorite aspects about this book is how Peterfreund revealed something about each character in each of their chapters. Each chapter is a different perspective, and every time something is revealed about that specific character. Some of the secrets I guessed but some I did not see coming. But I thought it was brilliant to reveal a secret in each chapter (and not all of them were outright revealed, some you had to read between the lines or put two and two together). It’s like tiny puzzle pieces fitting together over the length of this novel to create an almost complete puzzle. And with how the story ends, I’m suspecting even more character secrets will be revealed in the next book.

There are multiple point of views, as each of the main Clue characters has a voice, but I thought the chapters and voices really flowed well together. Though there isn’t quite a ton of romance, this first book sets the stage for potential romances between some characters in the next two books (and I’m rooting for two in particular!). It was great to see the characters start to rely on one another and trust their instincts and also develop some key life skills that they wouldn’t be able to learn in a classroom.

Overall, I thought this was a great book perfect for mystery genre fans and teens that are looking for a way to experience a classic board game in a new way. The killer was slightly easy to guess, but I still thought this was a fun and thrilling mystery read and I cannot wait to read the sequel. In the Hall with the Knife comes out next Tuesday, but you can preorder this fun book now!