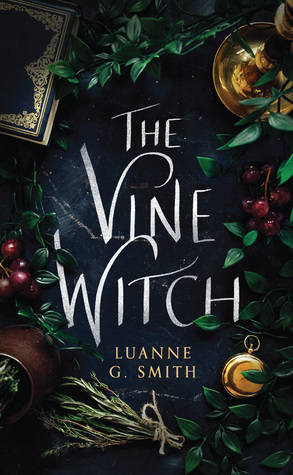 “You’ll burn in Hell for this. The witch scoffed. What makes you think I haven’t already?”

The Vine Witch is a spellbinding must-read for the Halloween season. It combines a lot of things I love. It has Witches, Wine, Murder, and a little bit of love to throw you off and I really enjoyed it.

Elena was cursed after she turned down a proposal. The joining of two people is supposed to be the highlight of a persons life but she didn’t feel that way. After turning it down, Elena is cursed for seven years. That is until she breaks it and returns to the only place she knows, Château Renard.

She’s excited to get back to the vineyard, help everything grow and to see her family again. But things have changed. It was sold to John-Paul Martel who doesn’t believe in superstitions. She talks him into letting her stay and she must perform her witchery when he’s not around.

The fields are glowing with a hex that Elena tries to rid of. But there’s something down deeper that Elena can’t let go of. She wants revenge. Revenge on the person who stole seven years of her life. As she tries to break apart the hex, she won’t rest until this person/s are brought to justice.

The Vine Witch was a great story. I was so enraptured by this story that I didn’t want to put it down. I really dislike it when life gets in the way of a good book.

This was a really fun story with amazing and strong characters. It was great to see different witches throughout and to read what all they could do.

This is great for people who love a great mystery with witches, wine, and a good romance.

This debut was fantastic and I can’t wait to read more by her.