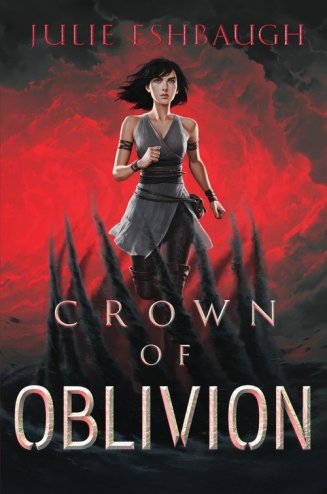 Astrid is the surrogate for Princess Renya, which means she bears the physical punishment if Renya steps out of line. Astrid has no choice—she and her family are Outsiders, the lower class of people without magic and without citizenship.

But there is a way out of this life—competing in the deadly Race of Oblivion. To enter the race, an Outsider is administered the drug Oblivion, which wipes their memory clear of their past as they enter a new world with nothing to help them but a slip of paper bearing their name and the first clue. It’s not as simple as solving a puzzle, however—for a majority of the contestants, the race ends in death. But winning would mean not only freedom for Astrid, but citizenship and health care for her entire family. With a dying father to think of, Astrid is desperate to prevail.

From the beginning, the race is filled with twists and turns. One of them is Darius, a fellow racer Astrid meets but isn’t sure she can trust. Though they team up in the race, as Astrid’s memories begin to resurface, she remembers just who he was to her—a scorned foe who may want revenge. Astrid also starts to notice she has powers no Outsider should—which could help her win the race, but also make her a target if anyone finds out. With stakes that couldn’t be higher, Astrid must decide what is more important: risking her life to remember the mysteries of the past, or playing a cutthroat game in order to win her—and her family’s—freedom.

Julie Eshbaugh is a YA writer and former filmmaker. She made two short films and then spent several years producing an online video series for teens which received several honors from the Webby Awards. Her new YA fantasy standalone, CROWN OF OBLIVION, is coming from HarperTeen November 2019. IVORY AND BONE (HarperTeen 2016) and OBSIDIAN AND STARS (HarperTeen 2017), her prehistoric fantasy duology, are out now. You can learn more about Julie’s writing escapades by visiting www.julieeshbaugh.com.

Check out all the amazing bloggers on this blog tour!

“Since the day I signed up to race, everywhere I go, I feel the breath of Death on the back of my neck. But tonight is the first I hear its footsteps.”

Crown of Oblivion is a thrilling race where characters’ limits are tested and lives are lost. But at the heart of this story lies a rebellion and a villain who is bent on making sure Astrid doesn’t survive the race. Julie Eshbaugh presents a book filled with action and beautiful character development, as well as captivating prose that kept me reading long into the night.

At the beginning of the story, the reader finds out that Astrid is Princess Renya’s surrogate: every time Renya misbehaves or does something she shouldn’t, Astrid receives the punishment. And there was a time where Astrid’s older brother, Jayden, was the prince’s surrogate, but that was before he escaped and presumed dead. Now, years later, Astrid will do anything to protect her dying father and younger brother, even if it means entering a race where your past is completely wiped from your mind and you fight other racers possibly to the death to win. But Astrid has something the other racers don’t and something that could get her killed: she has powerful magic that no Outsider should have.

“…I bite my lip between my teeth to hold them still, and remind myself what courage really is. Not the lack of fear, but action in the face of fear.”

Astrid is such a strong character; she’s brave, selfless, determined, powerful, and so much more. She has the strong sense to protect her family, which is why she enters the race. She wants to make sure her and her younger brother become citizens, so neither will ever have to worry about poverty or being an Outsider again. But, as Astrid is already a surrogate for the Princess, she’s above the Outsider status. Yet, she needs to make sure her brother is always protected, and that’s when she starts to realize that she could become a Citizen, and no longer be Princess Renya’s surrogate.

But before she enters the race and as she’s given Oblivion, someone commits a murder right in front of her, someone she knows. And because the powerful Oblivion drug has taken its course, she can’t remember who it was. So, throughout the race, she struggles to reclaim her past while fighting for her future; she doesn’t know who to trust, if anyone, and who to believe. By forgetting her whole past, she’s lost the ability to know just who is really looking out for her.

“If I told you monsters could be tamed, would you want to live with monsters? Even a tame monster is still a monster.”

I really enjoyed the side characters in Crown of Oblivion, especially the enemies-to-lovers romance. That’s a romance that I will always love, and the romance in this book is slow-burn, for sure. But it’s a good slow-burn. It offers the readers the chance to get to know both characters during the race and the opportunity to root for both of them, whether it be for wanting one of them to win the race or hoping they become romantically involved.

Eshbaugh’s world building of the race was unique and intricately designed; I could easily picture every scene during the race, and the descriptions and clues kept me intrigued. I felt like I was alongside Astrid trying to piece together the clues (usually before she discovered the answers), and I found that to be really fun. It was a cool way to interact with the story, even if I did end up guessing the wrong answer on almost all the clues.

Overall, Crown of Oblivion was a great book to read; I enjoyed the characters and the world and I loved how the plot thickened as the book went on. Crown of Oblivion is out in stores today, so if you’re looking for a book with mystery, rebellion, a race unlike any other, and non-stop action, then I definitely recommend checking out Crown of Oblivion!

Prize: Win a finished copy of CROWN OF OBLIVION by Julie Eshbaugh (US Only)