In this nail-biting sequel to Tehlor Kay Mejia’s critically acclaimed fantasy novel We Set the Dark on Fire, La Voz operative Carmen is forced to choose between the girl she loves and the success of the rebellion she’s devoted her life to.

Being a part of the resistance group La Voz is an act of devotion and desperation. On the other side of Medio’s border wall, the oppressed class fights for freedom and liberty, sacrificing what little they have to become defenders of the cause.

Carmen Santos is one of La Voz’s best soldiers, taken in when she was an orphaned child and trained to be a cunning spy. She spent years undercover at the Medio School for Girls, but now, with her identity exposed and the island on the brink of civil war, Carmen returns to the only real home she’s ever known: La Voz’s headquarters.

There she must reckon with her beloved leader, who is under the influence of an aggressive new recruit, and with the devastating news that her true love might be the target of an assassination plot. Will Carmen break with her community and save the girl who stole her heart—or fully embrace the ruthless rebel she was always meant to be?

The Phantom Prince: My Life with Ted Bundy- Elizabeth Kendall

Elizabeth Kendall’s 1981 memoir, detailing her six-year relationship with serial killer Ted Bundy, long out of print, now reissued with startling new material from the author and her daughter. Elizabeth Kendall’s memoir, The Phantom Prince, was originally published in 1981. Molly Kendall, her daughter, considered Bundy a father figure between the ages of three and ten.

Ted Bundy is one of the most notorious serial killers in American history and one of the most publicized to this day. However, very rarely do we hear from the women he left behind—the ones forgotten as mere footnotes in this tragedy. This updated and expanded reissue of Elizabeth Kendall’s 1981 book The Phantom Prince chronicles her intense, six-year relationship with Ted Bundy and its eventual unraveling. Featuring a new introduction and a new afterword by the author, never-before-seen photos, and a new chapter from the author’s daughter, Molly, this gripping account presents a remarkable examination of obsession, intrigue, and the darkness that love can mask.

A young psychiatrist with a potential cure for the madness that haunts Gotham City, Dr. Harleen Quinzel must prove her revolutionary theory to a skeptical establishment by delving into the disturbed minds of Arkham Asylum’s deadliest inmates. But the more time she spends with her criminally insane subjects, the closer she is drawn to one patient in particular–and the further she falls away from reality. The birth of legendary antihero Harley Quinn and the shocking origins of her twisted romance with the Joker are revealed in Harleen, a stunning new tale of love and obsession written and illustrated by renowned comics storyteller Stjepan Šejic (Aquaman: Underworld, Sunstone).

Shades of Magic Volume One: The Steel Prince- V.E. Schwab 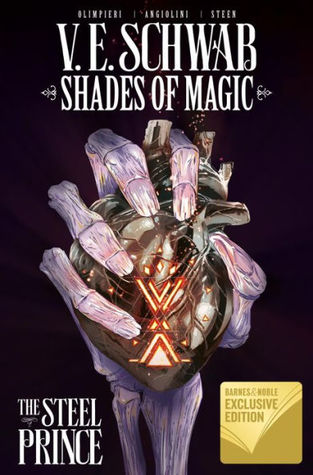 Written by #1 New York Times bestselling author V.E. Schwab and torn from the universe of the Shades of Magic sequence, this all-original comic book prequel to A Darker Shade of Magic is perfect for fans of bloody, swashbuckling adventure and gritty fantasy!

Delve into the thrilling, epic tale of the young and arrogant prince Maxim Maresh, long before he became the king of Red London and adoptive father to Kell, the lead of A Darker Shade of Magic!

The youthful Maresh is sent to a violent and unmanageable port city on the Blood Coast of Verose, on strict orders from his father, King Nokil Maresh, to cut his military teeth in this lawless landscape.

There, he encounters an unruly band of soldiers, a lawless landscape, and the intoxicatingly deadly presence of the newly returned pirate queen, Arisa…