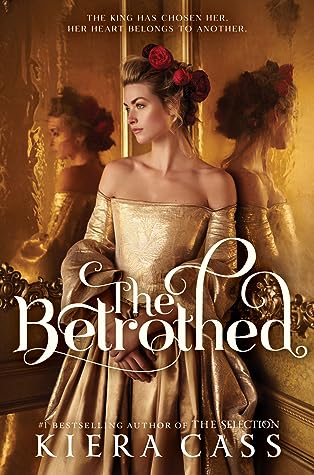 She’s captured the king’s heart. But who’s captured hers? #1 New York Times bestselling author Kiera Cass is ready to retake her crown as the queen of YA romance with this sparkling new duology.

The young king of Coroa has never been the type to settle down—that is, until he meets Hollis Brite.

Hollis has grown up at the castle, among the other daughters of nobility who hoped beyond hope that they’d catch the king’s eye. So when King Jameson declares his love for her, Hollis is shocked—and thrilled.

But she soon realizes that along with the extravagant presents and fawning attention, this new life brings outsized expectations—expectations that make her wonder if she’s really cut out for life as a royal.

And when she meets an Isolten stranger with the mysterious power to see right into her heart, she starts to wonder: Is there more to life outside the palace walls?

“I’d said he couldn’t burn me. I still believed that. If I was going to go up in flames, it would be my own doing.”

You may find this hard to believe but this was my first ever Kiera Cass adventure. I was expecting something so magical that I would be floating in the air on a mystical high but after reading this, I’m kind of confused as to why readers put this author on a pedestal.

I was drawn in with the promise of a royal/commoner love triangle. I’m such a sucker for a great, heart-wrenching love triangle. As I was waiting to be swept off my feet by the razzle-dazzle, I was a tad bit bored by the in-between. It started off slow because of the immaturity but it slowly picked up. It just didn’t skyrocket enough for me to fall in love.

The drama was what I lived and breathed but the triangle was mediocre. I have no words but I offer a shrug. We all can be swoony over a blonde-haired and crystal blue-eyed newcomer but would we cause an uproar in our lives for someone we don’t even know? Sigh!

The Betrothed was a complicated royal love story with murder, backstabbing, and a little sparkle to make mama shine but I wasn’t left heart-poundingly breathless like I was promised. I am intrigued to continue this series because of how this ended though. Maybe this will get better as time goes on.