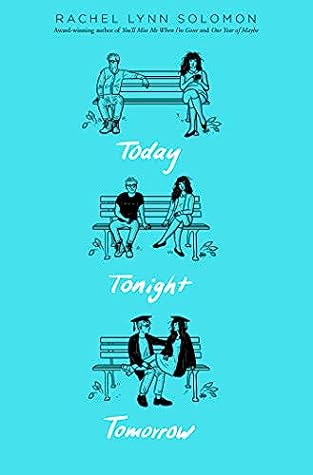 “You’re standing in your own f***ing way, and until you realize that, you won’t ever be happy with your reality.”

Reading a book written by Rachel Lynn Solomon is like waking up early in the morning with the sun shining into your bedroom, the birds singing sweetly, and you can’t help but have a smile on your face. These books touch my heart and she makes it easy for me to fall in love with her words.

I can tell you in a lot of different ways how beautiful this book is but this is something that you should experience. Something you should fully embrace because it will bring forth so much happiness that it’ll just make your day better. Rachel always writes with others in her mind and heart and you can feel that through every word that’s on these pages.

Rowan and Neil have their eye on the same goal and that is out-besting the other to become Valedictorian. Ever since Freshman year, this has been an ongoing battle to be at the top. No matter if it’s big or small, the game is always on between those two.

When Neil is announced as the valedictorian, Rowan is crushed but is determined more than ever to win the senior year scavenger hunt. It’s a yearly tradition where the junior class comes up with clues to things located in the Seattle area. You have to find that location and send in a picture of it. The winner will be receiving a bigger check than they normally hand out. Everyone is determined to win.

After the Howl scavenger hunt begins, Rowan overhears that some of their classmates plan to get them out of the game quickly. Jealously has spiked their classmates because it always seemed to be the Neil and Rowan show. They are ready for a change. Reluctantly, Neil and Rowan decide to team up to take down their classmates. Can Rowan and Neil put their differences aside to make this scavenger hunt the best ever? Or will Rowan finally take her chance to out best her strongest competitor, Neil? Maybe Rowan will finally see what has been in front of her this entire time.

Today Tonight Tomorrow was such a heartwarming read. It was sweet, cute, and funny. You’ll instantly fall in love with Rowan and Neil. Their quirkiness, their head-to-head competition, and their teamwork will give you all the feels. It’s all in good fun and you’ll be delighted at how all this plays out. Nothing will prepare you for how wondrous this is. Get ready to swoon!!