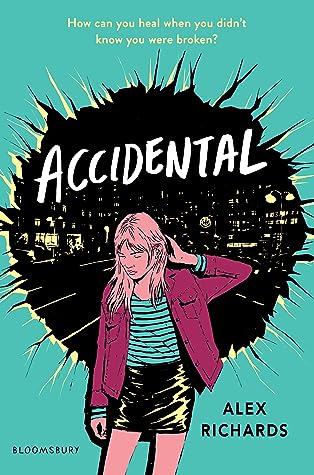 ”An uncluttered mind is a peaceful mind. You’ll hurt yourself, keeping it all pent up.”

The statistics for gun violence are staggering. Over 25,000 people this year alone have died from gun violence. The scary part is that the number doesn’t include people injured by a gunshot and the year isn’t over quite yet. It’s heartbreaking that this is the world we’re living in.

Imagine hearing a devastating story about your Mom’s death and then finding out it was all a lie. Come to find out, you had some part in it but you were a toddler. How would you feel? And how do you think it would affect your life? These are the questions and cold facts that Johanna has to face once she learns the truth.

Johanna always believed that her Mom was killed in a tragic car crash. Ever since she was three, she’s lived with her Grandparents, not knowing where her biological Dad was. So far, her life has been decent. She gets good grades, has the best friends, and comes home to such love and warmth. Everything changes when she receives a mysterious letter from someone claiming to be her Dad.

She keeps the letter secret and decides not to tell her Grandparents. What they don’t know won’t hurt them. They meet up and her Dad drops a bombshell on her. That her Mom didn’t die from a car accident but by Johanna’s very own hands. Her Mom was asleep and Johanna found an unlocked and loaded gun. It went off, killing her Mom. She is devastated and doesn’t believe this story. Until she asks her Grandparents. What she thought was her Dad making an ass of himself and upsetting her, it was all facts.

Now Johanna doesn’t quite know how to live with this news. It throws a wrench into her life. Her Grandparents lie to her for all of her life and the only one honest with her is someone who hasn’t been in her life for thirteen years. Her world turns upside down.

Will Johanna be able to grow and learn from the news? Or will she let herself fall into the black hole of despair?

This was a super emotional and powerful read. Johanna is such a strong and beautiful character. It was fascinating to read her story and watch her grow from page to page. No one could stop her. She was level-headed and strong-willed and no one was going to get in her way.

Johanna has the best support system. Her friends and boyfriend were such caring souls but what stood out the most was her Grandparents. Yes, they kept that awful secret from her but they let her figure out her life without demanding how she should go about it. They let her learn and breathe as an independent woman. It was beautiful.

Accidental was a great book. It deals with a subject that should be talked about and the earlier you discuss it, the better. This is definitely a step in the right direction. This is geared towards teens but I think adults should read this important book too. It was powerful and I loved every second of it.