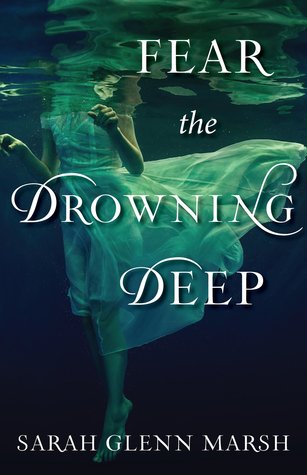 Some secrets are better left at the bottom of the ocean.

Sixteen-year-old Bridey Corkill longs to leave her small island and see the world; the farther from the sea, the better. When Bridey was young, she witnessed something lure her granddad off a cliff and into a watery grave with a smile on his face. Now, in 1913, those haunting memories are dredged to the surface when a young woman is found drowned on the beach. Bridey suspects that whatever compelled her Granddad to leap has made its return to the Isle of Man.

Soon, people in Bridey’s idyllic village begin vanishing, and she finds an injured boy on the shore–an outsider who can’t remember who he is or where he’s from. Bridey’s family takes him in so he can rest and heal. In exchange for saving his life, he teaches Bridey how to master her fear of the water–stealing her heart in the process.

But something sinister is lurking in the deep, and Bridey must gather her courage to figure out who–or what–is plaguing her village, and find a way to stop it before she loses everyone she loves.

“Fear can be a good thing. You can’t have courage without it. And it makes you alert.”

Your window is open and you can hear the waves crashing against the shore. It’s soothing. But if you listen a little closer, you can hear music. Music coming from a fiddle. The sound is intoxicating. It seeps into your mind and your soul as it surrounds you. It’s calling to you. Begging you to come closer to the music. Closer to the water. Closer to the edge of the cliff. With something so powerful calling out to you, would you be able to block its powerful message? Or would you fall to your watery grave?

Bridey saw just that as she watched her Granddad fall to his death. The last thing she remembers about her Granddad was the eerie smile on his face. She blinked and he was gone forever.

Now it’s 1913 and that day changed Bridey’s life forever. That haunting memory consumes her life and she’s made it a mission to stay away from the water. As a body washes up on shore, Bridey thinks that whatever called to her Grandad has come back to claim others.

Then villagers start vanishing after she finds a strange boy injured on the shore. Bridey’s family cleans his wounds and let’s him stay with them. He can’t remember his name or who he was before. Bridey names him Fynn and things escalate from there. He teaches her to overcome her fears and shows her what it truly means to be loved.

But things are growing more dim as people closer to her start to disappear. She knows something dark is lurking underneath the water. Now she’s determined to find out what it is and to save her village.

Will she succeed? Or will the waves come crashing down around her?

I think a lot of us have a fear about what hides and lurks in the sea. This brings those fears back to the surface. It was an intriguing idea that Sarah brought to life in her book. It sucked me in instantly with the promise of tall tales, mysterious sea creatures, and witchy magic. It definitely delivered but I just didn’t like how it ended. I was waiting for this epic battle finale but it just didn’t happen.

Fear the Drowning Deep was an okay read. I just wished that the ending was just as epic as the rest of the book. It was hauntingly beautiful and it sweetly sang its dark melody to me. Be ready to be swept off your feet by this mysterious read.