Kimberly Willis Holt’s The Ambassador of Nowhere, Texas is a stunning post-9/11 companion to the National Book Award-winner When Zachary Beaver Came to Town.

Decades after the Vietnam War and Toby’s life-changing summer with Zachary Beaver, Toby’s daughter Rylee is at a crossroads—her best friend Twig has started pushing her away just as Joe, a new kid from New York, settles into their small town of Antler. Rylee befriends Joe and learns that Joe’s father was a first responder on 9/11. The two unlikely friends soon embark on a project to find Zachary Beaver and hopefully reconnect him with Rylee’s father almost thirty years later.

This beautiful middle-grade novel is a tribute to friendships—old and new—and explores the challenges of rebuilding what may seem lost or destroyed. 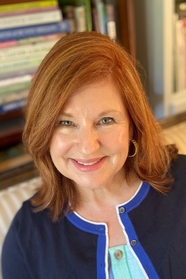 Kimberly Willis Holt is the author of the Piper Reed series, including Piper Reed, Navy Brat, Piper Reed, Clubhouse Queen, and Piper Reed, Rodeo Star. She has written many award-winning novels, including The Water Seeker and My Louisiana Sky, as well as the picture books Waiting for Gregory and Skinny Brown Dog. A former Navy brat herself, Holt was born in Pensacola, Florida, and lived all over the U.S. and the world—from Paris to Norfolk to Guam to New Orleans. Holt long dreamed of being a writer, but first worked as a radio news director, marketed a water park, and was an interior decorator, among other jobs. A few years after she started writing, her third book, When Zachary Beaver Came to Town, won a National Book Award for Young People’s Literature. She resides in West Texas with her family.

The Ambassador of Nowhere Texas is one of those middle grade stories that leaves you content and thankful that you picked up this book. It’s a story brimming with friendship, forgiveness, and overcoming hardships, and it’s a great read perfect for many readers. Holt’s new middle grade is an emotional, yet enlightening read, with heartfelt characters and a story you will not soon forget.

What I thoroughly enjoyed about this book the most is how relatable the characters were. The characters are beautifully developed throughout the whole book. I felt it was easy to relate to Rylee, especially as she was continuously growing throughout each chapter. Her conversations with her friends and Joe were engaging, even when the topic at hand was difficult to discuss. Rylee is a strong character that doesn’t give up easily and that in itself is truly inspiring. Rylee is definitely one of those characters that is bound to be a role model for many readers.

Kimberly Willis Holt has a way with words. Holt grips your heart from the very beginning and keeps you engaged with the characters and dialogue. She’s crafted a story with heart and friendship and what it means to rebuild. Holt captures the essence of what it would have been like to lose someone during 9/11 and how it’s like to try to move on, even decades later. When 9/11 happened, I was just a young child, not entirely sure of what was happening. But this book exceptionally creates that feeling of knowing what 9/11 was like for those that lost a loved one and lived through a tragic event. Holt provided a deeper understanding of the tragedy of 9/11 while also sticking to the facts, which made this story more emotional.

Overall, I enjoyed this middle grade read. Filled with wonderful characters, engaging dialogue, and emotional scenes, The Ambassador of Nowhere Texas is sure to grip your heart strings and leave you with an emotional connection to this beautiful story.

Up for grabs is ONE (1) physical copy of The Ambassador of Nowhere Texas by Kimberly Willis Holt. This giveaway is open to US residents only and will run from January 11th to January 18th at 11:59 PM CST. To enter, click the link below!

Check out the amazing bloggers on this book tour!