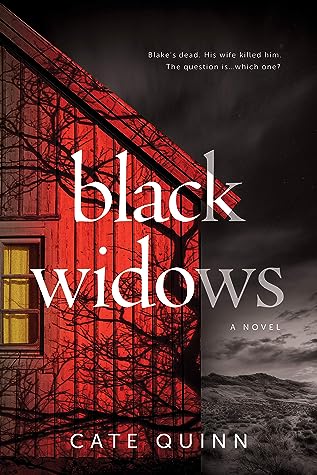 Blake is dead.
They say his wife killed him.
If so… which one?

“While Quinn writes with spirit on weighty subjects like domestic abuse, polygamy and religious cults, her primary and most poignant theme seems to be female friendship.” —New York Times Book Review

“An absolutely thrilling novel. I devoured it over a weekend, unable to put it down. It’s a clever and completely original take on a domestic thriller.” —Alex Michaelides, author of the #1 New York Times bestseller The Silent Patient

Rachel, the first wife, obedient and doting to a fault, with a past she’d prefer to keep quiet.
Tina, the rebel wife, everything Rachel isn’t, straight from rehab and the Vegas strip.
And Emily, the young wife, naïve and scared, estranged from her Catholic family.

It’s no secret that I’m weird and that I love to read weird books with bizarre topics. My favorite things to read are about serial killers, insane biographies, and books about cults. So this one jumped right out at me when I read the synopsis.

It started off with me zooming through pages because there was this need to gather all the information that I could. But then I felt as if I was a dog chasing its own tail. Information kept being repeated and repeated like it was a broken record. And that is where it lost me. I actually skimmed the last little bit because it wasn’t one that kept me all that interested and the killer was very easy to figure out. I needed more bizarre and less eye-rolling.

None of the characters were all that interesting and I didn’t feel any emotions towards them. They all had their own little secrets but it just wasn’t enough to have me interested in what happened to any of them.

Black Widows was an okay read with bland characters. The author tried too hard to be shocking and it fell flat. The twists that were supposed to be hair-raising were just your typical everyday stuff. I can’t say that I was overly impressed. I guess it was something to pass the time.