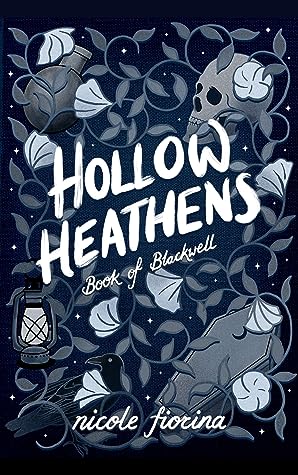 Once upon a time, there lived a girl named Fallon who was taken far away from home shortly after she was born.
A home that held more than strange traditions and bizarre superstitions.
Twenty-four years later, she returned to Weeping Hollow, a town she’d only heard about in stories during restless nights under a marble moon, to take care of her last living relative.
They called the nosy mortician a freakshow–a ghastly thing.
They said I couldn’t go near her.
Still, there was this aching pull to Fallon Grimaldi that I couldn’t escape.
A nostalgic pull as if we’d been here before.

Once upon a time, there lived a mysterious boy named Julian with a curse as old as centuries wrapped around his soul.
He was one of the four Hollow Heathens, the very dark creatures who caused the town’s people to live in fear.
And the Blackwell name was stained with darkness and death.
They called him a monster. Cold and hollow.
They said I shouldn’t go near him.
Still, there was this aching pull to Julian Blackwell that I couldn’t escape.
A nostalgic pull as if we’d been here before.

**This is the Young Adult Edition of Hollow Heathens: Book of Blackwell. This is an interconnected collection and can be read as a standalone. This book contains mild adult language and self-harm. Self-harm used in this fantasy world is for the purpose of magic. Please know self-harm, under any circumstance, is never okay.**

“Once Upon a time. Things lurk in the darkness. Monsters, ghosts, ghastly supernatural beings tethered by bottomless energy to keep them there, pinned to the earth and walking without direction, without purpose.”