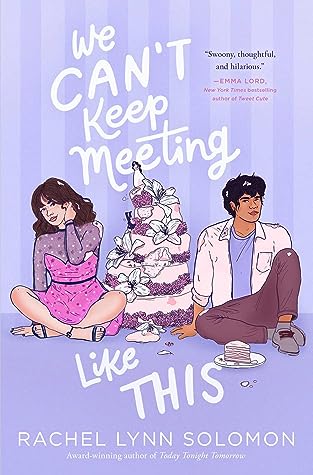 “Sometimes the good outweighs the bad. Sometimes those great times are so f****ng great that they make the bad times a little easier to handle.”

Rachel Lynn Solomon is one of those authors that always lifts my spirits. Her books deal with a lot more than just romance. They hit many major topics without being overwhelming. They really make you think and appreciate who you are inside and out. You cannot find a more positive writer than Rachel. So I knew that this book was going to be spectacular.

This book was cute in all the best of ways. Quinn doesn’t like over-the-top declarations of love and Tarek is the exact opposite. They are very family-oriented and helped out their family businesses. They were the perfect match. I loved Quinns attitude because me and her are the same. She second guessed a lot in her life but she finally found the courage to speak her truths. And can we talk about how romantic Tarek was? I’m now starting a fan club! *Swoon*

Rachel digs deep with this one and I applaud her for bringing some difficult topics to the surface without batting an eye. Mental health is something a lot of authors go to but not many hit it right on the head. The female lead is more than likely going to be dealing with those issues but Rachel turns this upside down. Not only is Quinn dealing with issues that need therapy but Tarek is as well. It’s a very common misconception that guys deal with mental health differently than women and that couldn’t be further from the truth. I’m glad that she pointed out that it can affect both men and women and that if you speak up, people will help.

This was also very religion and sex positive. (Wow, I never thought I would say that in the same sentence.) This is what we need more of. We shouldn’t be shaming anyone for being who they are. You should judge people by how they act and treat you, not by what religion that are and not by how many sexual partners they had. That’s their business and their business alone. This celebrates both of those and I am overjoyed. It was all very positive and it was amazing. It definitely made my soul happy.

We Can’t Keep Meeting Like This is my favorite book by Rachel so far. Quinn and Tarek’s relationship wasn’t perfect but it was fun to see how all of their wittiness played out. It was all very realistic and brought forth a lot of heavy situations with some great outcomes. This was seriously the perfect read to change my mood for the better.

Just remember to be yourself and don’t be afraid to tell people what you want and what you’re going through. You would be surprised how fast that weight lifts off from your shoulders when you open up.