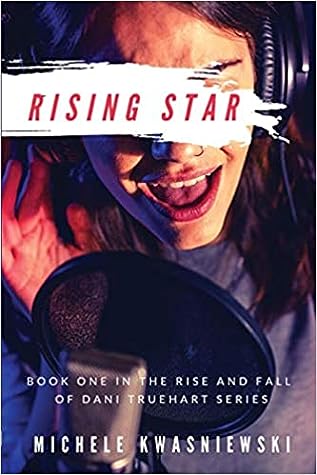 In the first book in THE RISE AND FALL OF DANI TRUEHART series, RISING STAR, fifteen-year-old Dani Truehart is living a life that is not quite her own. Driven by her mother’s desire for fame and fortune, she has spent her childhood dutifully training for a career as a pop star. On the brink of discovery, doubts begin to creep into Dani’s mind as she questions her own desire for fame, and she wonders whether she can trust the motivations of the adults who are driving her forward.

Following a brilliant audition arranged by her vocal/dance coach and former ’80s pop icon Martin Fox, Dani is thrown full-force into the music industry. She leaves her friends, family and scheming mother behind to move with Martin, who has become her legal guardian, into the Malibu compound of her new manager, Jenner Redman. Jenner, the former swindling manager of Martin’s boy band, leverages what’s left of his depleted fortune to launch Dani’s career.

Isolated from her life at home and trying to stay apace with her demanding schedule, Dani struggles to keep in touch with those she loves, connect to her withholding mother and find her voice as an artist. With Martin and Jenner at odds over their rocky past and finding herself unprepared to handle the pressures of her future singing career, Dani’s debut album and future stardom are at risk of falling apart.

“Sometimes you have to do things in this business that you don’t want to do to get where you want to go. The tricky part is making compromises that don’t alter your principles.”

There’s a tiny part in all of us that wonders what it would be like to be rich and famous. To be the center of attention and in the limelight. We all like the idea of being there but we never fully know what it actually takes to make it to the top. There’s a lot more to it than looking beautiful and waving your money around.

This book gives us a sneak peek at what someone is willing to go through to make it to the top and all while being a teenager.

Dani is not your typical teenager. Her Mom controls her life and is trying to get her daughter to the top of the singing food chain. And her Mom will stop at nothing to make it happen. She monitors everything she eats, plans out her entire day, and hires an ex-boyband member from the ’80s to help her on her journey. No cost is too expensive.

Martin knows that Dani will make it huge and she’s on the cusp of finally being discovered. He makes an offer to fully take her under his wing and become her guardian when it comes to her career. With some arm twisting, the papers are signed and Martin is now in charge of her upcoming career.

Dani is excited to leave her high-stress and conniving Mom behind and move to Malibu to start recording her EP. She moves into a mansion in Malibu with her guardian and her new manager. Things are getting more stressful and demanding as her schedule gets packed with things to do to get ready for her single to release.

Being isolated from family, friends, and her boyfriend hits her hard as she has no time in her schedule to see or speak to them. Will the demands of her upcoming career swallow her whole? Or will she finally be able to juggle everything and become a success?

This was a great story and it opened my eyes to the high demands it takes to become a star. I never realized how much a person gives up to follow their dreams. They rarely see family and friends and often times make poor health choices along the way. Talk about dedication!

Rising Star was a great book and a book that I couldn’t put down. The character development was superb as Dani finds her way in life. I’m excited to travel with Dani and see how her career pans out in the next book.