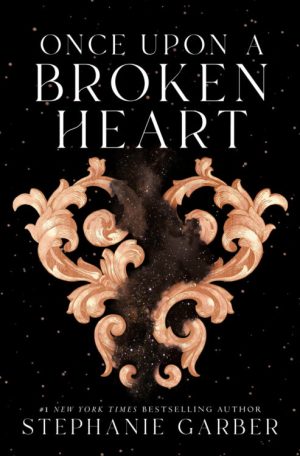 Title: Once Upon a Broken Heart

From the #1 New York Times bestselling author of Caraval, the first book in a new series about love, curses, and the lengths that people will go to for happily ever after.

Evangeline Fox was raised in her beloved father’s curiosity shop, where she grew up on legends about immortals, like the tragic Prince of Hearts. She knows his powers are mythic, his kiss is worth dying for, and that bargains with him rarely end well.

But when Evangeline learns that the love of her life is about to marry another, she becomes desperate enough to offer the Prince of Hearts whatever he wants in exchange for his help to stop the wedding. The prince only asks for three kisses. But after Evangeline’s first promised kiss, she learns that the Prince of Hearts wants far more from her than she’s pledged. And he has plans for Evangeline that will either end in the greatest happily ever after, or the most exquisite tragedy…

For those who know me, you know Stephanie Garber is my all-time favorite author. I just about flipped out when she announced her next book and the title was revealed, then the gorgeous cover. And I bursted with excitement when a beautiful ARC of Once Upon a Broken Heart showed up on my doorstep. I devoured this book in mere days (trust me, it would have been a day if I didn’t have to work) and WOW. Just wow. Once Upon a Broken Heart was everything I wanted in Stephanie’s new book, plus more. This is easily a book where magic and mayhem fit the description perfectly.

In Once Upon a Broken Heart, we’re introduced to Evangeline, a girl with pink hair and a heart that only wants to know love. She craves her happily every after and will do absolutely anything to get that happy ending. Even pray to a Fate, the deadly Prince of Hearts. What she never expected was him to answer her back or ask for three kisses in return for saving her first love. And thus starts a wicked, magical game between a Fate and a girl, and this Fate will stop at nothing to get what he wants most.

Evangeline is easily one of those characters you can’t help but root for. She’s someone I’d help every step of the way, even though she makes several mistakes. But that’s what makes her human. Her emotions are worn on her sleeve, and she yearns for her happily ever after, whether that be with her first love, a prince, or someone entirely out of the question (don’t worry, this fairytale is not really a love triangle). She does everything with her heart at the front. All her mishaps are out of love and because of that, I loved her character even more. But what I loved most about Evangeline was seeing her unravel the mystery that is her past and figuring out that Jacks just doesn’t need her for the three promised kisses but something even more dangerous.

If you’ve read the Caraval series, then you will fall in love with Once Upon a Broken Heart, especially if Jacks, the Prince of Hearts, was one of your favorite characters. I throughly enjoyed the continuation of his story and seeing a whole new side of Jacks, one that is vengeful yet wickedly mesmerizing. He’s the Fate we love, but this story reminds us that he is the Prince of Hearts and you should never make a deal with a Fate, especially one as dangerous as him. And as all truths begin to reveal themselves in Once Upon a Broken Heart, it becomes abundantly clear that Jacks, in all his charm and cleverness, has an ulterior motive, one that involves Evangeline.

With all that aside, I loved Jacks. How could I not? He may be deadly but he’s wildly attractive and alluring and just such a fun character. His story is further developed, and I loved having the chance to learn more about him. Even when he’s in danger or caught in a plot he didn’t quite anticipate, he’s still charming. What I also really enjoyed was that Jacks was not the only Fate part of this story – there are a few other key players that reveal themselves. You’ll have to read Once Upon a Broken Heart to find out which Fates are here to play.

Stephanie has, once again, outdone herself with Once Upon a Broken Heart. The world building is stunning and beautifully crafted that I felt like I was there, enjoying Nocte Neverending with Evangeline and Marisol. I was dazzled by the magic; this magical world is every bit as enchanting as a fairytale. And all the twists and turns left me on the edge of my seat. I was enthralled with this story and the fast-paced plot. Like the Caraval trilogy, Stephanie knows how to craft a glittery world with a storyline that leaves you guessing. She knows how to make magic feel real, and how to get her readers to feel heartache and pain and joy. And have I mentioned that this story includes the three Ms: Magic, Mystery, and Murder? Believe me when I say that Once Upon a Broken Heart will keep you enchanted and working against the clock to put all the puzzle pieces together. And when the story ends, if you’re like me, you will be left wishing the sequel was already in your hands. Once Upon a Broken Heart is one of those books that stays with you well after you’ve read the last word.

My quick blurb: Once Upon a Broken Heart is a mesmerizing tale of heartache and magic and the lengths someone will go to secure their happy ending. A spectacular, whimsical story that will leave you craving more of this magical world.