I am thrilled to be hosting a spot on the ONCE UPON A K-PROM by Kat Cho Blog Tour hosted by Rockstar Book Tours. Check out my post and make sure to enter the giveaway! 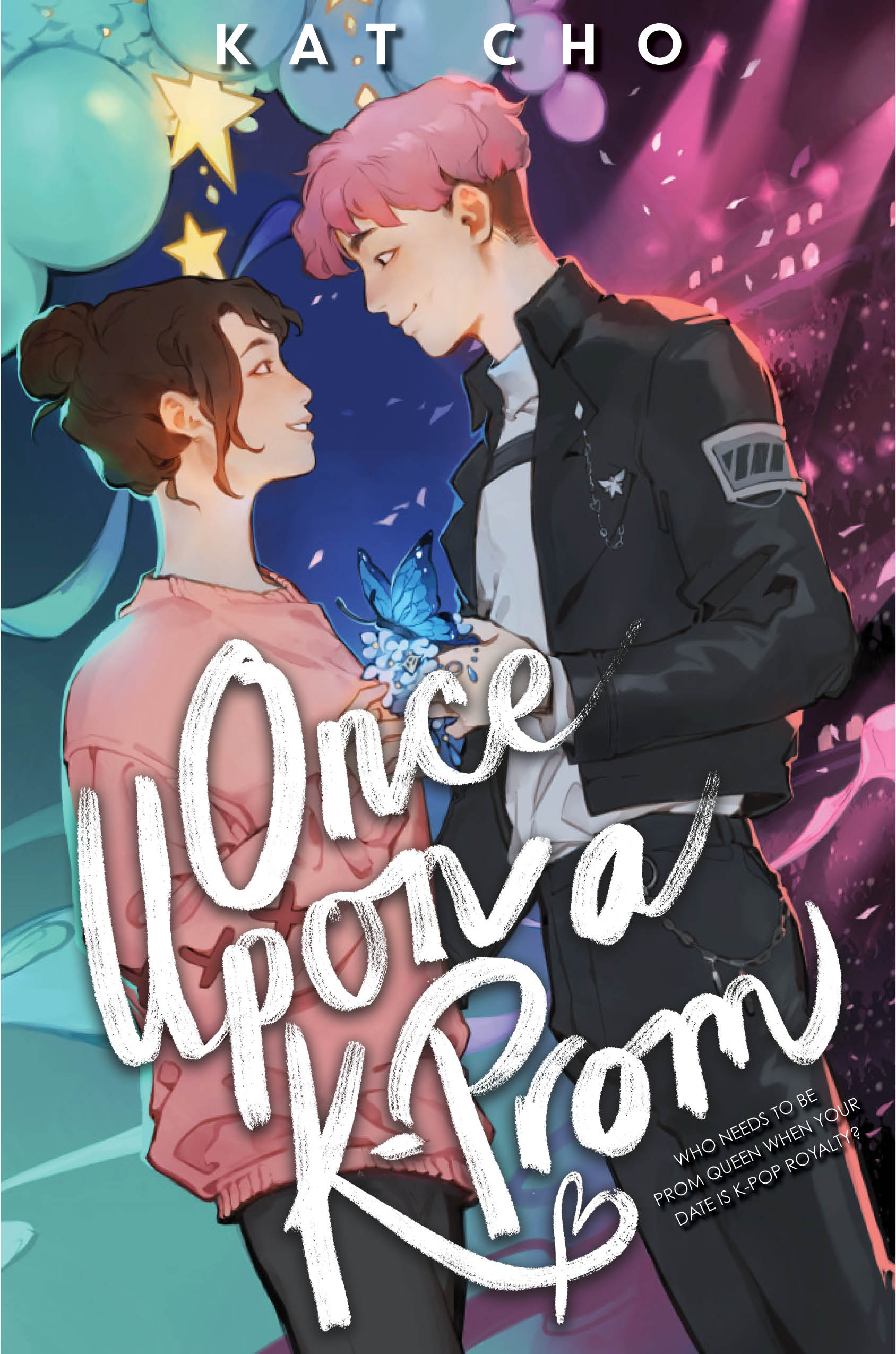 Book Title: Once Upon a K-Prom

What would you do if the world’s biggest K-pop star asked you to prom? Perfect for fans of Jenny Han and Sandhya Menon, this hilarious and heartfelt novel brings the glamour and drama of the K-pop world straight to high school.

Elena Soo has always felt overshadowed. Whether by her more successful older sisters, her more popular twin brother, or her more outgoing best friend, everyone except Elena seems to know exactly who they are and what they want. But she is certain about one thing – she has no interest in going to prom. While the rest of the school is giddy over corsages and dresses, Elena would rather spend her time working to save the local community center, the one place that’s always made her feel like she belonged.

So when international K-pop superstar Robbie Choi shows up at her house to ask her to prom, Elena is more confused than ever. Because the one person who always accepted Elena as she is? Her childhood best friend, Robbie Choi. And the one thing she maybe, possibly, secretly wants more than anything? For the two of them to keep the promise they made each other as kids: to go to prom together. But that was seven years ago, and with this new K-pop persona, pink hair, and stylish clothes, Robbie is nothing like the sweet, goofy boy she remembers. The boy she shared all her secrets with. The boy she used to love.

Besides, prom with a guy who comes with hordes of screaming fans, online haters, and relentless paparazzi is the last thing Elena wants – even if she can’t stop thinking about Robbie’s smile…right?

Kat Cho used to hide books under the bathroom sink and then sneak in there to read after bedtime. Her parents pretended not to know. This helped when she decided to write a dinosaur time-travel novel at the tender age of nine. Sadly, that book was not published. She currently lives and works in NYC and spends her free time trying to figure out what kind of puppy to adopt. Kat is the internationally bestselling author of the Gumiho duology (Penguin) and Once Upon a K-Prom (Disney).

My Top 5 Reasons to Read Once Upon a K-Prom

Excerpt from Chapter One

When most people think of prom, they probably picture dresses and limos and dancing the night away with their dream date. When I think of prom, I picture aching feet, overpriced decorations, and unrealistic expectations.

Obviously, I was in the minority, though. As was proof by the long line of upper classmen willing to spend their entire lunch period standing in line to buy prom tickets.

Okay, fine, it was a big fat failure.

We’d set up a station where students could donate their change to West Pinebrook’s Community Center after buying tickets.

“Any more donations?” I asked, leaning over the table.

I glared at the jar. It was almost empty. The dollar bill I’d placed in there was still the only donation. I’d thought maybe having money already would make us look less pathetic, but it just looked sadder somehow.

I glanced at my carefully written spreadsheet. I’d made it to track potential donations. We were way behind what I’d projected. But I guess I hadn’t factored in teenage apathy.

“Has anyone taken a pamphlet?” I glared at the suspiciously full pile.

“To do that they’d have to stop avoiding our table like we all had the plague.” Josie rolled her eyes.

I’d spent days writing those pamphlets up, included photos of the kids from the community center at last year’s holiday party and the fundraiser website to donate online. It explained that we weren’t telling people not to go to prom, but to rethink how they spent their money on the dance.

That’s why my best friend, Josie Flores, had come up with the term “alterna-prom initiative” even though I worried it was a little wordy and confusing. It hadn’t helped though. Everyone just thought we were flat out protesting prom.

“Come on, El, if they won’t take a pamphlet, let’s just hand them out,” Josie said, stepping out from behind the table. She was willow thin with smooth brown skin, a pretty narrow face, and dark hair that framed it in curls. It was everything I used to wish for when I was little instead of my round Korean face, short legs, and flat stick-straight black hair.

“No, you guard the table and the…dollar,” Josie said, eyeing the sad jar.

I gave him an “I’m sorry” shrug at getting stuck with table duty again. But he dutifully sat back down. He’d do anything for Josie.

Since sophomore year, he always mooned at her behind his wire-rimmed glasses. They weirdly worked on him, like nerdy white boy chic. His curly hair used to be cropped short in middle school, but he’d grown it out now and it flopped into his eyes. It was cute in a Shawn Mendes kind of way.

Josie started down the line, handing pamphlets out, making sure each person at least opened it before she moved on. She didn’t seem to mind the annoyed looks she got or the rude comments. I wish I could be that confident, not to care what everyone thought of me.

“They’re in trouble of losing funding,” I said to a group of juniors I’d just handed pamphlets to. None had opened them. So I took one and opened it myself to a bullet point list of ways to save on prom. “Instead of spending hundreds on limos and dresses and tuxedos, you could just wear an old suit or a dress from rent-the-runway and drive yourself. Then donate what you saved to the center.”

“Hey, you’re Ethan Soo’s sister right?” One of them squinted at me as if trying to see the family resemblance.

I sighed. It was common for kids to remember my brother before they remembered something as pesky as my actual name. He was the popular twin after all.

“I’m Elena,” I mumbled. “So, back to the community center, if you don’t have any extra cash right now, there’s an online donation site you can use too.”

They all just blinked at me before returning to their conversation about some new movie that had just released. Were these people heartless? Did they not see the adorable children smiling out at them from the pamphlet?

“I’m sorry,” I tried to get their attention again, but they kept ignoring me.

“El, you gotta stop apologizing all the time,” Josie said, walking over. She was down to her last few pamphlets and I felt guilty that I still had a full pile.

“I can’t help it.” I frowned because she was right. It was just such a knee-jerk reaction for me to constantly apologize every time I felt even an inkling that someone felt uncomfortable around me.

“I don’t think this is working,” Josie said, scowling at the line of students doing their best to ignore us. “I think we’ll have to use more radical methods.”

“Well, unless you want to go full Robin Hood, I think pamphlets and peaceful protest are all we’ve got right now.” I sighed.

“I have something to help our cause,” Josie said, taking off toward the exit.

“As long as it doesn’t make a mess!” I called after her, but I wasn’t sure if she heard me as she pushed out of the cafeteria.

As I waited for Josie to return, the line moved up and a girl swung her bag into me as she turned to talk to her friend.

“Can you find somewhere else to stand?” she asked, huffing in annoyance.

“Sorry,” I mumbled before I could stop myself.

“Did you see her weird-ass pamphlets?” the girl’s friend said, not caring that I was standing right there. “Imagine spending all your time trying to ruin prom.”

I sighed and stepped back, turning away from the line and the annoyed glares. I wasn’t trying to ruin prom. I just didn’t see the allure of it. I’d watched every one of my three older sisters get excited about the dance only to come home let down in some way or another at the end of the night. It gives perspective to a kid, even if I was only ten.

I leaned against a lunch table as I waited for Josie to get back. It was filled with a group of freshmen girls sighing over a music video playing on one of their phones. I could barely hear it over the loud volume of voices crashing through the cafeteria, but I recognized the group: WDB.

WDB had achieved something no other K-pop group had done for over a decade: entered the hearts of teens across the whole globe and somehow became the first Korean group to win an MTV music award and American Music Award, which got them invited to other award shows, and they’d even performed on SNL. It was all so impressive, but there was an extra layer of surrealness for me as the face of the main rapper, Robbie Choi, graced the screen. It was a face I knew well even though it had lost all of the baby fat that had puffed up his cheeks when we were ten. We’d been best friends. I knew things about him that weren’t written in his official profile.

I knew how he got that little scar through his eyebrow. (He’d fallen out of a wardrobe during an epic game of manhunter and into the edge of a coffee table.)

I knew that even though he was famous now for his luscious locks that had been dyed the whole rainbow during his career, he’d once let me shave a stripe through it because we’d wanted to see if we could write his name in his hair. (Spoiler: we could not. And yes, we did get into epic trouble with our parents after that stunt.)

Now there were girls swooning over him and giggling whenever his face popped up on screen.

To be honest, I’d once been just like everyone else, looking forward to a magical prom night filled with slow dancing and perfectly posed photos. But I’d always imagined it with a specific person. And since he was no longer in this country, let alone this town…it’s pretty obvious why ten-year-old Elena’s dream prom plan would never actually happen. And when you knew something wouldn’t work out, it was best to move on.

1 winner will receive a finished copy of ONCE UPON A K-PROM, US Only.