I hope you all are reading and suggesting some banned books to readers. I’m wearing my Read Banned Books shirt at the library hoping to get some readers to read something that makes others uncomfortable.

This week I plan on reading a book that won a best book of the year award in Scotland and a Waterstones edition of a book from  favorite author. 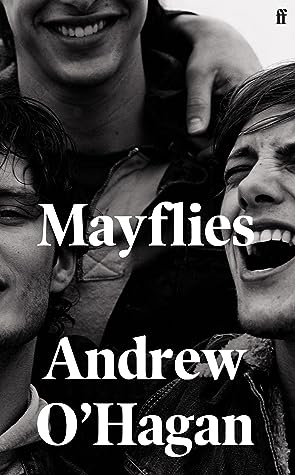 From the widely renowned author Andrew O’Hagan, a heartbreaking novel of an extraordinary lifelong friendship.

Everyone has a Tully Dawson: the friend who defines your life.

In the summer of 1986, in a small Scottish town, James and Tully ignite a brilliant friendship based on music, films and the rebel spirit. With school over and the locked world of their fathers before them, they rush towards the climax of their youth: a magical weekend in Manchester, the epicentre of everything that inspires them in working-class Britain. There, against the greatest soundtrack ever recorded, a vow is made: to go at life differently. Thirty years on, half a life away, the phone rings. Tully has news.

Mayflies is a memorial to youth’s euphorias and to everyday tragedy. A tender goodbye to an old union, it discovers the joy and the costs of love.

A lavish historical drama reimagining of The Island of Doctor Moreau set against the backdrop of nineteenth-century Mexico.

Carlota Moreau: a young woman, growing up in a distant and luxuriant estate, safe from the conflict and strife of the Yucatán peninsula. The only daughter of either a genius, or a madman.

Montgomery Laughton: a melancholic overseer with a tragic past and a propensity for alcohol. An outcast who assists Dr. Moreau with his scientific experiments, which are financed by the Lizaldes, owners of magnificent haciendas and plentiful coffers.

The hybrids: the fruits of the Doctor’s labor, destined to blindly obey their creator and remain in the shadows. A motley group of part human, part animal monstrosities.

All of them living in a perfectly balanced and static world, which is jolted by the abrupt arrival of Eduardo Lizalde, the charming and careless son of Doctor Moreau’s patron, who will unwittingly begin a dangerous chain reaction.

For Moreau keeps secrets, Carlota has questions, and in the sweltering heat of the jungle, passions may ignite.

The Daughter of Doctor Moreau is both a dazzling historical novel and a daring science fiction journey.