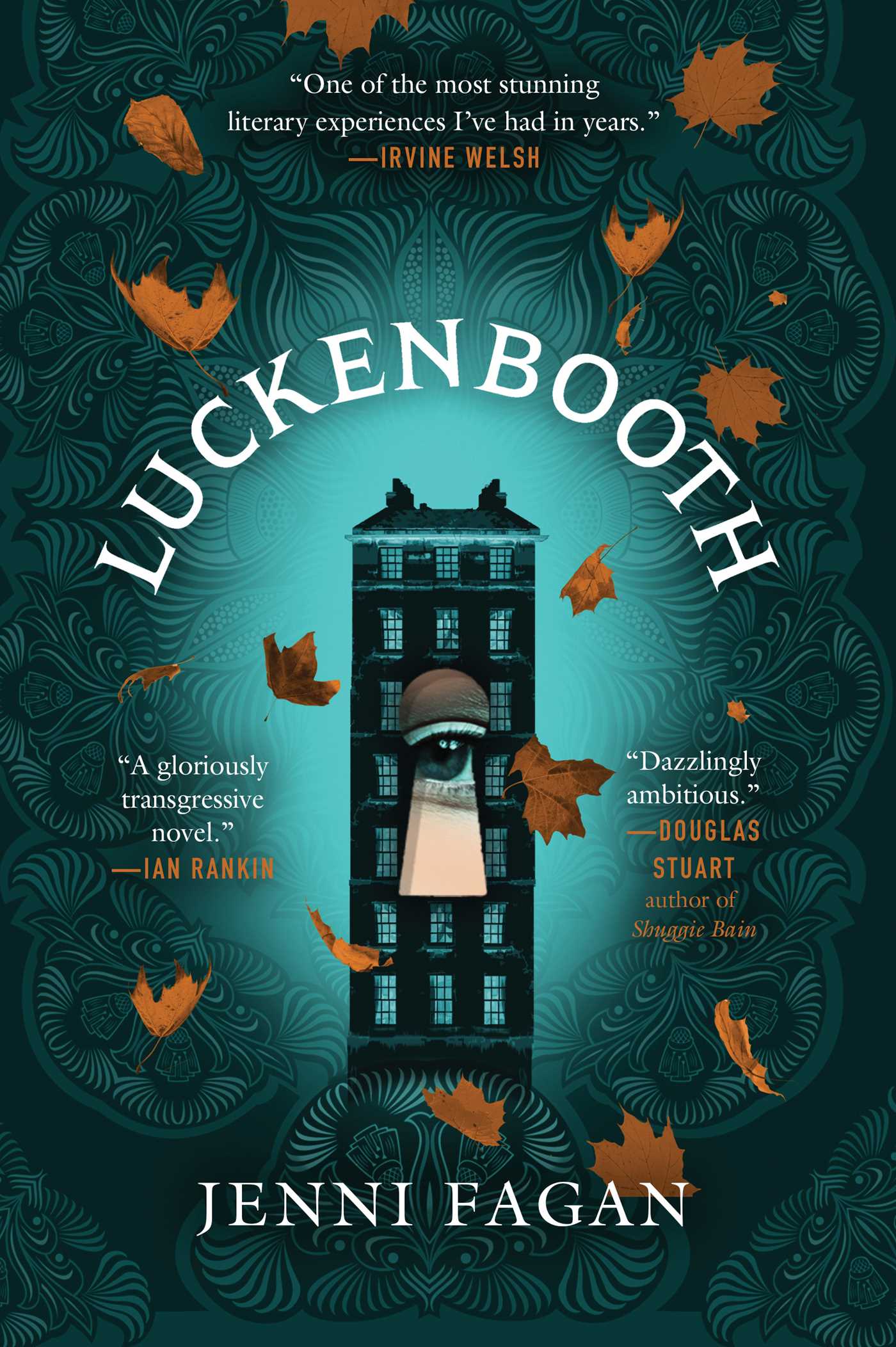 ONE OF GRANTA MAGAZINE’S BEST OF YOUNG BRITISH NOVELISTS

1910, Edinburgh. Jessie, the devil’s daughter, arrives on the doorstep of an imposing tenement building and knocks on a freshly painted wooden door. She has been sent by her father to bear a child for a wealthy couple, but, when things go wrong, she places a curse on the building and all who live there – and it lasts a century.

Caught in the crossfire are the residents of 10 Luckenbooth Close, and they all have their own stories to tell. While the world outside is changing, inside, the curse creeps up all nine floors and through each door. Soon, the building’s longest kept secret – the truth of what happened to Jessie – will finally be heard.

“[Luckenbooth] is a cabinet of curiosities that is both a love letter to the Scottish capital, and a knife to its throat. The sparking nervous system of the book is its characters, all broken, all reassembled in their own ways, like Kintsugi, the Japanese process of highlighting cracks by mending them with gold…Despite its darkness, the novel is carried by jagged delight and optimism, a bright hope coming through the walls and a fundamental belief in people. Filled with blistering social critique, Luckenbooth is an ambitious and ravishing novel that will haunt me long after.” —Lauren Beukes ― The New York Times

“Luckenbooth is a deliciously weird gothic horror. Fagan once again examines the way people are affected by unhealthy spaces. Having survived the state care system that bounced her among dozens of homes, she writes about placement and displacement with an arresting mix of insight and passion. ‘No. 10 Luckenbooth,’ Fagan writes, ‘has some kind of purple memory vibrating through it like an endless hum.’ But it’s not so much a hum as a muffled scream—with a feral melody and a thundering bass line. Her prose has never been more cinematic. This story’s inexorable acceleration and its crafty use of suggestion and elision demonstrate the special effects that the best writers can brew up without a single line of Hollywood software—just paper, ink and ghosts.” —Ron Charles ― The Washington Post

“In this inventive, experimental novel, Jenni Fagan traces a century in one Edinburgh tenement building and the lives of its occupants. When an unholy union forms between a childless government minister, his wife, and their fertile young maid — who happens to be the Devil’s own daughter — the building they live in is cursed for decades, affecting residents for generations.” —Bustle ― Most Anticipated Books Of January 2022

“Fagan pulls out all the stops, looking evil straight in the eye and working the numerous components of this ambitious tale into a cohesive whole. ” —The Washington Independent Review of Books

“In Jenni Fagan’s stunning new novel, an apartment building at 10 Luckenbooth Close in Edinburough first is scene to a terrible crime, then witness to all the blazing currents of the 20th century, moving on to explore visions of alternative history and future dystopias. Perfect for those who liked Things in Jars by Jess Kidd.” —Molly Odintz ― CrimeReads, Most Anticipated Crime Fiction of 2022

“The interwoven lives of the tenants of No. 10 Luckenbooth Close, a tenement in the heart of Edinburgh, drive this outstanding novel from Fagan (The Panopticon), set over the course of the 20th century. All the tenants’ stories enchant as the action builds to a satisfying conclusion. This highly original novel with its fairy tale quality will appeal to fantasy fans as well.” —Publishers Weekly, Starred Review

“I’m like the girl in the story who lets toads fall from her mouth but others think they are pearls. I still have the smell of death on me. It will be weeks before it goes.”

I am no stranger when it comes to haunted locations. Locations with such a dark and disturbing past. When you think haunted hotels, your brain automatically goes to the Cecil and Chelsea hotels. They both have such a rich history of eeriness and death. As of today, I haven’t been to those hotels but I definitely will before I leave this earth.

Picture it, 1910, a girl in a coffin making her way to a tenement to get impregnated by a very rich man who can’t have a baby with his fiancé. Once Jessie gets to this hotel, some troubling situations make themselves known. After that, a curse is now attached to this place. Over the next nine decades, the curse makes its way all throughout this place. We hear all of their stories and listen to all the eventful mishappenings of their lives. As the curse becomes stronger, the biggest secret may just be revealed.

This was a very unusual and haunting book full of anguish and terror. Everyone who has lived in this tenement has a wicked story to tell and you won’t believe what goes on behind these closed doors. The more that I read of this book, the more it reminded me of the haunted and bizarre life of the Cecil Hotel. Which has recently opened back up. It was an interesting and unique read. Never read anything like this before and it threw me for a loop.

Luckenbooth had a creepy and gothic atmosphere which I love and this wound up being a decent story. It wasn’t as horrifying as I had hoped but I found myself wanting to find out more about the tenets and the curse that plagued the tenement. I really enjoyed reading Jessie’s story and those parts were my favorite. After reading this, I would definitely read more by this author.

–  5 Winners will receive a Copy of LUCKENBOOTH by Jenni Fagan.

– 1 Winner will receive a $20 Amazon Gift Card
Click on the image below to enter.
Good Luck!

Jenni Fagan is an award-winning novelist, poet, screenwriter and artist – she has published several fiction novels and poetry collections, and her work has been translated into numerous languages to great critical acclaim worldwide. Jenni has been on multiple award lists including becoming a Granta Best of Young British Novelist – a once in a decade accolade – for her debut The Panopticon. Her first two fiction novels received the front cover of The New York Times Book Review, who described her as “the Patron Saint of Literary Street Urchins.”

She has written for The Independent, Marie Claire and the New York Times, and been on lists for Desmond Elliott, Encore, James Tait Black, Sunday Times Short Story Award, BBC International Short Story Prize among others, and was twice nominated for the Pushcart Prize. She has concluded a PhD at the University of Edinburgh in 2020, becoming a Dr. of Philosophy, and has a vast body of photography and other artworks that she intends to collate and exhibit at some point. She is the current Poetry Lecturer at Strathclyde University.

Jenni grew up in the local authority care system for 16 years, before spending several years in homeless accommodation, she has moved over forty-five times and spent her teens and early twenties playing in punk and then grunge bands. She has been a Robert Louis Stevenson Fellow in Grez, France, a Gavin Wallace Fellow as Poet in Residence at Summerhall for a year where she engraved poetry onto bones and installed her poems around the building, also a University of Edinburgh Writer in Residence, Arvon Tutor and she has worked with young people, blind and visually impaired writers, people in prison or secure facilities, among other vulnerable groups.

Jenni has held residencies at Shakespeare and Company in Paris, writing several of her poetry collections there, it is her favourite place to read and she considers it one of her literary homes.

She is working on several projects across the page and screen.

Thank you, Jean and Pegasus Books for allowing me to review this book. For more information about this release and other upcoming releases, please click on the button below.
Happy reading.