USA Today bestselling author Kerry Adrienne’s Shifter Wars series comes to its epic conclusion when former enemies align, but is it too late to protect everyone they’ve come to love? 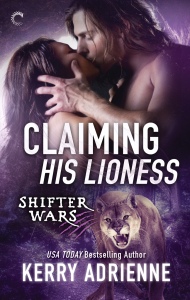 Lara has always relished being a thorn in Mason’s paw. When she was chosen as pride Enforcer, it was easier than ever to get under the passionate shifter’s skin. But with the scent of humans in the air comes a threat she’s powerless to battle alone.

If there’s one thing Mason hates more than relinquishing control to a female, it’s the attraction he feels for the fiery lioness. Joining forces with Lara against an insidious enemy only makes their primal bond hotter—and the two of them stronger.

Now it’s up to them, side by side, to bring together three warring shifter clans, win the final fight and save Deep Creek.

A deep breath and the world didn’t seem quite as red. Another breath. Don’t let him get to you.

“Women have roles and men have roles.” Mason cleared his throat then narrowed his eyes. “Not better or worse. Different.”

“This isn’t the Middle Ages.” Her voice was calm. Soft but firm.

“Wow, seriously? Women have babies and fight. You saw how much help the lionesses were at the cave. We’d have lost a lot more lions if we hadn’t been there…to fight. We weren’t there to nurse cubs.” He was getting to her. She kicked at the leaves on the ground.

Only an hour or so till dark. The faint strains of sunset were already slanting through the trees, painting an orange glow to the surroundings, and the forest sounds were shifting to nocturnal melodies.

“You helped a lot and I appreciate that. My point is, why not let the men take care of you now? We aren’t in desperate need of your help like we were at the cave, so why not let us protect you?”

He really didn’t get it. Lara started to speak but paused. What could she say to make him understand? Did he really think women had roles that were so defined, they couldn’t do other things too? Or did he feel that it was his role to make sure women were safe and secure?

Regardless, it was obnoxious. And a prime example of how tall, dark and dangerous wasn’t enough.

“It’s noble of you to want to protect the women.” She chewed the inside of her cheek, trying to maintain her calm and phrase things in a nonconfrontational way. No point in having him dismiss her thoughts because he felt intimidated. “But you don’t need to protect us unless we ask you to. We can protect ourselves. You should accept the help or you’re going to have a lot of pissed-off lionesses. Trust me, you don’t want that.”

Mason looked deeper into the forest, his shoulders bunched with tension. His back, broad and sloping to a muscular ass, filled his black T-shirt perfectly. Wrestling with him wasn’t so bad, was it? In other circumstances, it could be a lot of fun.

She fought the urge to run her hand over his shoulders to comfort him and satisfy her craving. Yank his T-shirt off and press herself against those muscles. They were definitely hard. She’d felt them when he lay across her on the ground.

No. She shook her head.

Don’t miss any of the Shifter Wars Series by Kerry Adrienne!

Enter to win an ebook or print book from Kerry Adrienne (winner’s choice)!