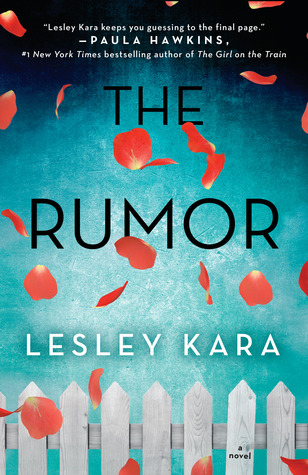 “All the others did what I said. I think they were a little bit scared of me. I’d had a good role model, you see. I knew how scary people acted. I knew the sorts of things they said. The way they looked at you and turned your insides to liquid. I was acting out the only thing I knew. What happened at home. What I’d seen. What I’d heard.”

This is going to be the best thriller of the year. Nothing has shocked me as much as this. When you think you have it all figured out, something comes along and makes you second guess everything. I will admit, I rolled my eyes and sighed because I was a hundred percent sure that I figured it out. And I was wrong, I was close but so very wrong. You’ll keep guessing right up until the end and that last sentence will blow your mind.

A notorious killer has been released from prison and may be living in a small town under a new identity. Joanna hears all the rumors and even gossips like all the other Moms to fit in. This killer is living in her town and everyone is a suspect.

Joanna is living with her son, Alfie in the town she grew up in to be closer to her Mother. When she goes to a book club and mentions the rumor of the unknown identity of the killer, things in her life take a weird turn. Someone starts to torment her. They post cryptic tweets on Twitter and even photoshop a picture of her son. She becomes uneasy and her mind starts to be controlled by these thoughts of who would be doing something like this to her and her family.

Joanna will do anything to protect the people she loves. But she may soon regret the day she shared a rumor…..

The Rumor is the debut thriller that everyone will be talking about. This book will be the reason why we all have trust issues. But this was so riveting and disturbing that you won’t be able to put it down. Just think twice before you spread that rumor, you never know who’s life you’ll ruin just by one little lie. That rumor could even cost you something precious in your life.