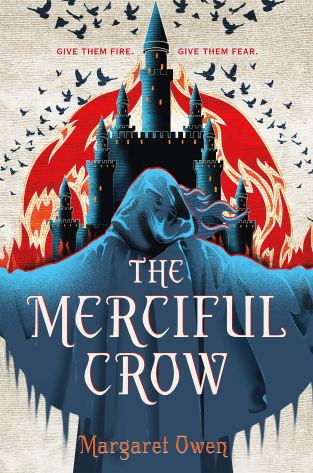 Born and raised at the end of the Oregon Trail, Margaret Owen spent her childhood haunting the halls of Powell’s Books. After earning her degree in Japanese, her love of espresso called her north to Seattle, where she worked in everything from thrift stores to presidential campaigns. The common thread between every job can be summed up as: lessons were learned.

She now spends her days wrestling disgruntled characters onto the page, and negotiating a long-term hostage situation with her two monstrous cats. (There is surprisingly little difference between the two.)

“Fie remembered the first time she’d held Phoenix fire. She hadn’t wanted to burn the world down; she’d wanted the world to know she could.”

The Merciful Crow is one of those YA dark fantasy books that you will remember. This book brings the fantasy genre to new heights, with incredible world building and memorable characters and with a romance that sparks right off the page. The Merciful Crow is easily one of my top reads of 2019.

Fie is part of the lowest caste in her world, known as Crow. She is a Crow-witch in training, someone with the ability to use magic of the other castes from their teeth. This world is built on a caste system, with each caste level named after a type of bird. The teeth from each caste give Fie the ability to use different types of magic. The higher caste levels have a birthright (which Crow does not) and everyone treats the Crows as if they’re not humans and don’t deserve to breathe the same air as them. The whole caste system was intriguing and it was sad, yet eye-opening, to see how Crows are treated.

Fie is thrown together with a prince and his attractive Hawk bodyguard when her father can no longer oversee the Oath sworn with the Phoenix prince. Now on the run from Vultures and others wanting to kill them, Fie must safely guide the prince to his allies. And on this journey, she starts to figure out exactly who she wants to be and what it means to be a Crow Chief and to follow your destiny.

“Look after your own. Crows had one rule. And she had to be a Crow Chief.”

Fie is an overall relatable character. One of the best things about The Merciful Crow is how Fie is captured between the words of the story. She’s just like anyone else in the world: she has wants that she can’t put before her own family because they don’t necessarily do anything for the needs of her crew. She’s also fiercely loyal to her family. My favorite thing about Fie, though, was her boldness. She easily speaks her mind and, though she is quite stubborn, her boldness creates a fun experience for the reader.

And then there’s the secondary characters, who Margaret Owen brings to life through the pages and gives all the characters the scenes they need for the readers to understand just who each character is and what their need in the story is. And that romance…WOAH. Margaret Owen sure knows how to write a blossoming romance. It was passionate and slow-burning and everything I look for in a romance. It’s honestly one of the best romances I’ve read in a while.

“I can do something better with my life than die.”

Margaret Owen is a talented storyteller who easily weaves together beautiful descriptive scenes and wholly original characters. The writing is different and unique from most YA fantasy books I’ve read, but I loved that. The writing has its own voice and, dang, is that voice captivating. I could not put this book down and when I had to, I could not get the story out of my head. And I’m not fully prepared to wait for the sequel because July 2020 is far away and my heart needs the sequel now.

The Merciful Crow captured my attention from the first line and refused to let go. It’s honestly difficult to put my love for this book into words because I don’t quite know the right words to say to do this book justice. The Merciful Crow was just so unique and fantastical and an overall mesmerizing story. It’s complex and engrossing and a fast-paced read. I will forever recommend this book.

If you’re looking for a dark and enthralling fantasy with captivating characters and solid writing and world building, then I highly recommend The Merciful Crow.

My overall review: 5 out of 5 stars

Check out the other amazing bloggers on The Merciful Crow tour!

Prize: Win a final copy of The Merciful Crow + a book-themed make-up bag (US/CAN Only)